Responding to concern over lack of new housing construction, the City of Los Angeles passed an ordinance with an urgency clause extending the lives of tentative and vesting tentative tract maps, preliminary parcel maps and associated discretionary entitlements. Ordinance No. 180,647 has been signed by the Mayor and is currently in effect.

The City’s action follows Senate Bill 1185 (SB 1185) which was passed last year. SB 1185 extends the life of a subdivision map (tentative tract map, vesting tentative tract map, or preliminary parcel map) by one additional year. Before SB 1185 was passed, an applicant had three years to record a final subdivision map before the tentative or preliminary map expired. The applicant could apply for extensions for up to five additional years. Under SB 1185, the initial period was increased from three to four years for those subdivision maps that would have expired on or after July 15, 2008 and before January 1, 2011. SB 1185 also increased the additional extensions for subdivision maps from five to six years. Altogether, SB 1185 provides for a possible ten-year maximum life for tentative and preliminary maps.

Currently, the State Senate is considering another bill (SB 333) which would extend the life of a subdivision map for a two-year period (in addition to the one-year period approved by SB 1185). That bill is still in committee, but a final vote on the bill is expected next month.

Los Angeles Offers Time Extensions
Ordinance No. 180,647 implements SB 1185 by providing time extensions to all tentative tract and preliminary parcel maps as well as adding an additional year to the life of all related entitlements. Since housing projects often require entitlements such as zone changes, variances or specific plan exceptions in addition to a subdivision map, ensuring these entitlements are also extended is vital to the project’s viability. In most cases, an extension for a subdivision
map alone, without a similar extension for project related entitlements, would have no benefit.

The table below was provided by the City Planning Commission and illustrates the changes to the initial expiration periods for common discretionary land use entitlements. 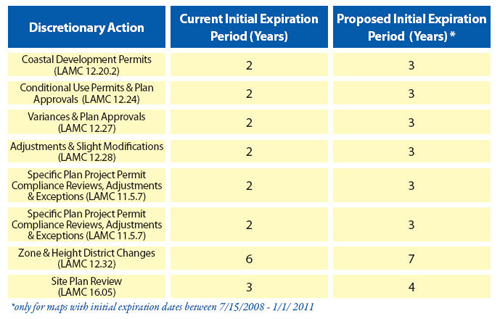